We took an impossibly dilapidated cab a few kilometres out of the city to visit this famous part of its society. 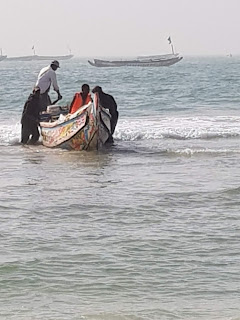 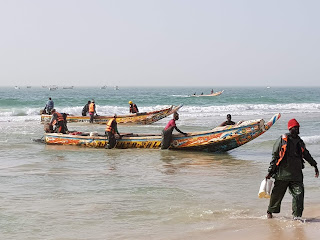 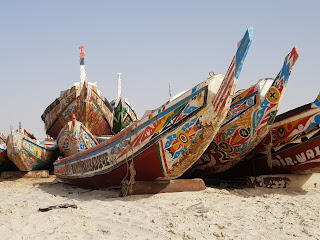 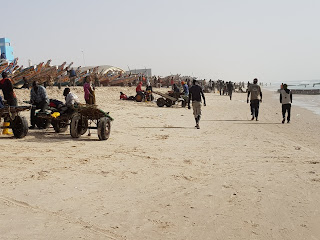 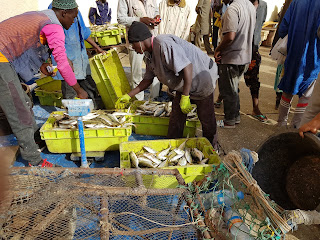 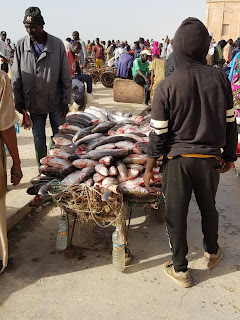 It seemed quieter than I had expected, but nevertheless brim full of life. There were fishermen dragging boats up the sand, rhythmically shouting to coordinate the effort; donkey-carts loaded with plastic bags of fish and the occasional outboard motor; women frying the catch on the beach and boorish uniformed men aggressively piloting four-wheel-drive buggies through the crowds along the shore.

The catch is sold right where it's caught. No long supply chain here.

We had seen pictures of this in guide books but it looks, feels and smells different in the flesh. I travelled to experience difference and definitely found it here, writ very large. This whole scene felt ages old.

Samba, our driver was waiting for us and I wished he wasn't. I'd have liked to linger. Delighted to have visited, though.*

Today
We leave to cross the Diama border with Senegal this morning. I have to confess to a little apprehension. We're likely to be intercepted by hustlers telling us our intended crossing is unsafe in an attempt to divert us to where we would be subjected to the scams perpetrated at Rosso. Having negotiated that, we'll have 20k of unsurfaced (and - in other seasons - impassable) track to ride. It runs through a nature reserve. We're told we have to watch out for wart hogs.

I've also realised that trying to conceive of the whole of the rest of the trip in one go is stressful. It's too big. Must compartmentalise more!

*We discovered later that the majority of fishermen here are from Senegal, particularly St Louis. The Mauritanians are desert-dwellers. They don't have any historical relationship with the sea.
at November 13, 2019