The week just passed
This has been a trip lacuna.

Holed up in a swanky villa, courtesy of birthday girl, aka, The Pillion, aka, Angelika Embacher-Rampat, accompanied by her children and a partner, we've had an indulgent, relaxed time (but see Breaking up... below).

Angelika is now living in a new decade of her life.

We  visited the Île de Gorée - a twenty minute ferry ride from Dakar - to see the home of a person involved in the Atlantic slave trade. It has cells on its lower floor. This is where the owner would keep the captives prior to shipping them to America. This was a very normal feature of houses of this period. There are many in Saint Louis. It's sobering. 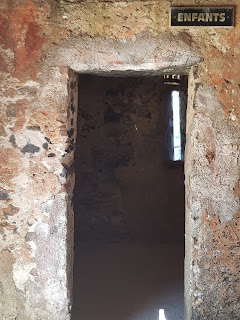 Bianca and Bryan left last night and Dom flies back to the States this evening. Angelika has been in her element having her nearest and dearest around. And the change in tempo and chemistry has probably been a good thing for Pillion and Pilot, too.

Angelika and I will now move to a more modest, but still pleasant, hotel closer to the centre of Saly.

Breaking up is hard to do
All this week I've been trying to get someone to take the bike off my hands and transport it home. I haven't succeeded yet and it's got under my skin.

I'm hoping for better news tomorrow. I'll be happier when it's done.

Saly cabbies
I don't mind paying a modest 'tourist surcharge' when I'm in a country in which my weekly income probably exceeds the local monthly wage. But I do mind being lied to, bullied, manipulated and generally disrespected in the attempt to rip me off.

It's not the 'collectivo' cabbies I'm complaining about. These are local, always very dilapidated, short-journey cars that plough up and down the roads. They stop on request, take several passengers simultaneously, and generally expect 1,000 or 1,500 CFA (West African Franc, £1.30 - £2.00) to take us the three kilometers into town.

My complaint is about the private-hire drivers. These are in smarter cars and do longer distances, such as into Dakar. You might hire one for the day. They're booked through an agency which agrees a fee. Then the driver uses every manoeuvre he knows to wring extra money from you. He needs more for fuel. It's always ten times his acutal usage. He needs more for tolls. He needs a separate fee for this or that journey for reasons known only to him. And he's aggressive in demanding it.

We're finding this behaviour in other aspects of the society, too.

It is starting to make me dislike being here.

But I did see a security guard carefully place a drunken tourist's phone and money back in his shoulder bag today before decanting him into a cab.

Messages
Thank you to everyone who has sent sentiments of support and encouragement recently. There are times when positive input is particularly welcome and this has been one.

Onwards
We've sketched out a plan for our next couple of months. If it comes to fruition it will see us spend two more weeks here and in The Gambia, fly to Côte d'Ivoire and spend Christmas and new year there. Then a fortnight in Ghana and we'll sail home. Fifteen days on the briny to end the trip.

We're both looking forward to the new vibe.

Family outing
On the street next to our villa...