From The Pillion
I’m too busy absorbing the hustle and bustle of life in Chefchaouen, Morocco, and have fallen behind with a little blog I had intended to post earlier.

Whilst in Seville, the Pillion went off in search of Roman ruins (thank you Lucy & Wes for suggesting), whilst the Pilot did his own thing.

Some 9km northwest of Seville lie the remains of Itálica, the first Roman City founded on the Iberian Peninsula.

Traveller, if you ever come this way, you won’t feel disappointed. 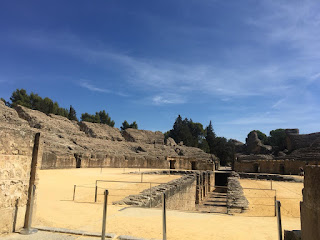 The Amphitheater, one of the biggest of the Empire, seated 25,000 and is one of the oldest conserved buildings of Itálica.

As befits any proper Roman city, there are remains of the bathing area and communal latrine (good for gossip) and of course the main thermal baths, including an exercise area.


They were clever with water, the Romans, and had a proper sewage system with the fluid sloshing about underneath the city, bringing fresh supplies and rushing away the waste.

Unfortunately, they were too busy enjoying themselves and got big and greedy. After the Empire fell apart, so did Itálica.

Memories of it started to recover in the 16th and 17th centuries and an awareness grew during the 19th century to protect the site. Plunderers had made off with what they could smuggle out, including all the marble plaques covering the Amphitheater’s façade.

The continuous pillaging of the city was condemned and in 1912 Itálica was declared a National Monument.

My visit was out of season and I had the place almost to myself.
The approach to the Amphitheater felt like an oasis of calm, trees and plants lining the path, birds tweeting (in its original meaning!) and a light breeze in the air.
at October 07, 2019