From the Pillion
From Guelmim, a city in Southern Morocco dubbed the 'Gateway to the Desert', it's a gruelling 2,000km to the border between Mauritania and Senegal.

The Sahara sneaks right up to the Atlantic and most of the journey following the coastline involves riding through it. There were sand drifts pushing into the road, long spells of riding through bleak desertscapes of flat terrain with the odd stubborn plant peering through. Suddenly mini dunes of sand would appear right by the roadside. Four to five metres high, small in comparison with their proper cousins inland, but impressive nonetheless. Some of it was energy-sapping. 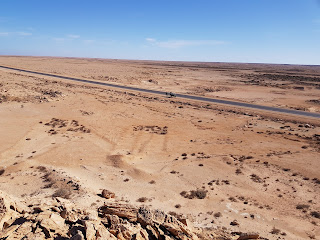 Bedouin or Touareg camel herders were tending to their flock, colourful turbans on their heads and their faces covered by soft material offering protection from the ever present wind and dust. Once, a white camel stood in the road, alone, and looked at us rather bored as we stopped. Eventually, it trundled off in its haughty camel manner. We passed pungent goat markets and rode through small villages, no more than a few shacks offering their wares and some aged tents nearby. Simon's daughter, Kate asked 'What do you hear' in the desert?

Well, when riding it's the grumble of the engine over the howl of the wind. When you stop and there is no wind, stillness hovers in the air. You hear your inner voice. And that can be scary or inspiring, depending where you are in your inner landscape on that particular day. As the novelty of encountering the desert wore off, we decided to just get on with it and have a few longish days.

Dakhla in Southern Morocco to Nouadhibou in Mauritania was gruelling, mostly because of two hours of relentless wind coming at us when we set off and the five-hour border crossing - see Simon's blog Where the Maghreb meets 'Africa'. What got to me was the chaotic crossing of no-man's-land in the midday heat and trying to keep a cool head. We did it.

I have no desire to ride through the desert again.

If you think Southern Morocco and Western Sahara have wind and dust, Mauritania offers even more of the stuff!

Lonely Planet describes Nouadhibou as 'often by-passed by travellers' and offers its 'sleepiness' as its selling point. That is like the estate agent speak; 'has potential'. Only the arterial roads are asphalted, there is no music in bars and restaurants. Life doesn't seem to offer much joy, it's a hard, daily grind to get by, accompanied by the muezzin's aggressive call to prayer.

But there seems to be plenty of fish to eat.

However, all the people we encountered, responded to our greetings and enquiries with the most disarming smiles.

Nouakchott, capital of Mauritania, is only 60 years old and described as 'sleepily idiosyncratic'. Only the last of those adjectives applied to the driving habits.

We stayed in a super-comfy auberge that served croissants and baguettes rivalling any Parisienne establishment. Pascal, the owner, went the extra mile by taking us to the ATMs that would dispense money and generally helping us with travel-related issues.

We also learnt that a caste system exists in Mauritania and the upper echelons of society still use 'slaves'. To clarify, they are called slaves, but their position is more like that of a serf as we understand it.

Your trajectory in life is determined at birth.

We met some interesting people staying at the auberge with whom we'd like to stay in touch.

And so, here we are in Senegal, reflecting on the trip. We are on anti-malarial medication and the beds are covered by mosquito nets. We are in West Africa as I imagined it. There is music!

This is what I've discovered (not speaking for the Pilot):

I am not as hardcore as most of the fellow bikers we are in touch with or whose blogs/books I've read.

We have covered nearly 10,000 miles (16,000 km, sounds more impressive! 😜) and I feel a bit exhausted. Maybe the trip, as initially conceived, has always been too ambitious for us?

I struggle riding in the heat. Fancy that, it's hot in Africa! Normally, you'd strip off, but I don't want to compromise on safety, so I'll have to be sweaty Betty.

Our luggage plus me on this heavy machine makes it harder for Simon to ride, especially on uncertain surfaces - and I haven't eaten that many cakes!!

He shoulders the responsibility for both our 'safeties' and he feels the weight of it. Having come off the bike has made us a bit nervous about any random stretches of sand appearing in the road.

Maybe the African leg of our trip would be more fun with a smaller bike and not two-up?

I've been on the edge of my comfort zone several times.

Ah, I hear my other inner voice say, isn't that the whole point of travelling? Surely, the trip was never about having endless fun, but was an adventure?

Anyway, where do we go from here? To reach Côte d'Ivoire means riding through Mali or Guinea. Local people advise against Mali, although fellow bikers have travelled through the southern stretch without problems. We're told there are safe houses to stay in en route. Safe houses?!

We've booked a villa in Saly, just south of Dakar, for 10 days. My kids and Bryan are flying out to celebrate my birthday and we'll have time to recalibrate and make decisions.

However, we are not actually in desperate straits, caught up in a civil war or anything. We have options.

To those who are interested in the relationship aspect of the trip (Simon was asked this question by a fellow guest at our previous stay, an interesting and candid guy travelling with his son - and no, the question was not prompted by us sitting in post-row silence!)...

😱 We have discovered all our negative habits and traits that wind the other up - there is nowhere to hide.

😟 Our respective personalities make us, perhaps, not the best-suited pair for a trip like this.

😊 We are still speaking, adult to adult.

😁 We are still playing backgammon and reading stories to each other. Simon still hates to lose! 😡 *

🥰 We remind each other that most of the time we are tired and slightly stressed. We need each other's support, not criticism.

Right Freud, what have you got to say to that??